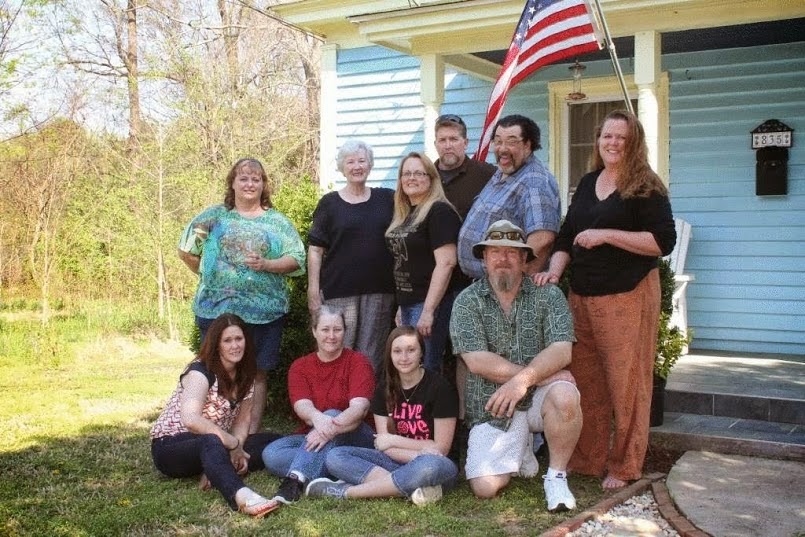 This motley crew makes up the Carolina Order of the Smoking Fish. The name comes from a web-site we all read and have for years. We "met" on line and now we have met in  person. I already knew all but three of this group, and I was pleased to finally meet the others and see the ones I had not seen in a long time.

All bloggers know how much they value the interaction of their readers and those other whom they read often. You come to know them, over the years, almost as well as you do local friends. They laugh with you, cry with you, offer consolation, humor and empathy when needed and share their anger and moments of frustration as well - which leads to lessons learned and valued.

It was so nice to be able to be with them; to share a meal (everyone brought something) and the hosts provided grilled meats and appetizers. I finally met the "Blond Goddess's" handsome husband, of whom she writes so fondly and with humor. He is all she says he is - and a heck of a nice man - who didn't seem to mind the old lady in the group. (They are all in their 40's or very early 50's.) That he is an antique and memorabilia collector didn't hurt, as we had something in common right away. He even let me hug him at the end of the evening ( and he says he "isn't a hugger." I met Blond Goddess during one of my trips back home to Charleston, along with 4 others. I wish they all could have been here yesterday.

A Durham blogger named Brenda is one I stumbled onto in the early days of blogging and have enjoyed her former blog and being on Facebook with her too. Having never met in person, it was great to cast my eyes on her at last. I'd seen photos, of course, but they never do justice to the real person.

Our hosts, Tiff and Biff  (their blog names) I have known for about 7 years, as I have Renn and her daughter "L". Nicer people would be very hard to find. They all have very good - albeit quirky - senses of humor and I marvel at their take on life.....and say....."Why didn't I think of that?" L was a quiet and tolerant teenager; I even saw a smile or two creep over her pretty face. Now she will realize that her mama has some pretty cool friends....lol  Tiff and Biff live in "The Tiny House" in Wake Forest, NC, and no better hosts can be found. Laid back and welcoming at the same time, they are a treat to be with and I always look forward to seeing them.

Shiny Rod, as he is known on the site, is a special person, a good writer who is not wary of sharing his feelings, his music and humor with us on Facebook. He is good with advice about computers and I was really looking forward to meeting him in person; he was so nice. (Gives good hugs too!)

The day was capped off by attending a performance of Biff's band, known as "Steelwater", at the small amphitheater in front of Relish .  The weather could not have been more perfect; both during the day and for sitting outdoors in the evening, listening to great rock music and watching small children play with beanbags. Some people brought their dogs too, and the animal lovers among us (nearly all) managed to pet a few. 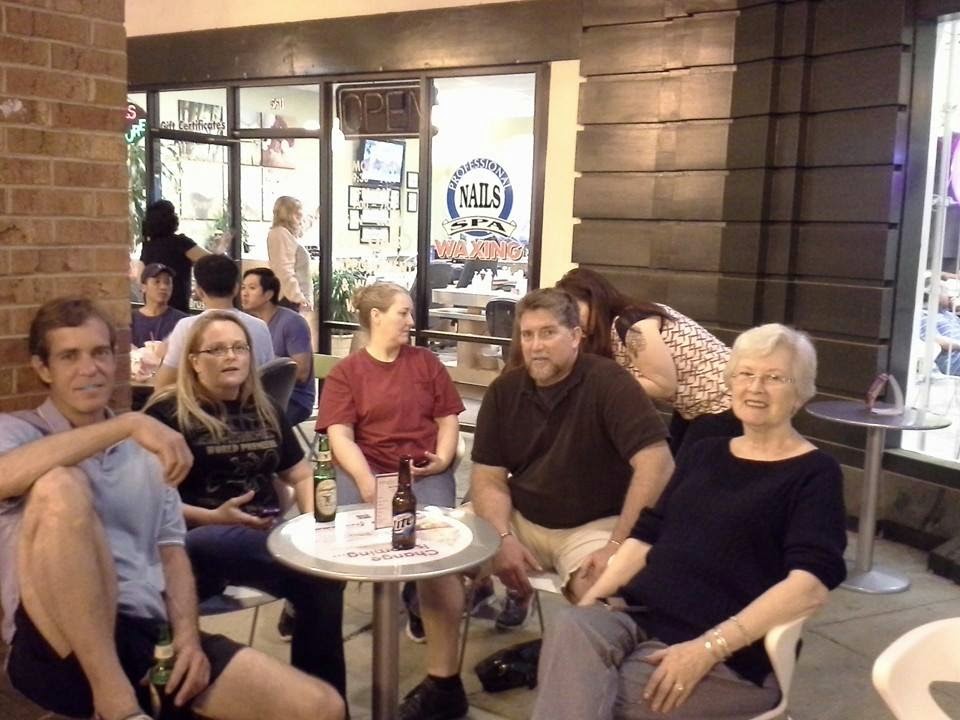 All in all, it was a perfect day.....one I hope can be repeated before too many more years pass.
Posted by kenju at 11:21 AM

It was a great pleasure to be in your company Judy and to enjoy the fun and laughter of friends. Hopes and wishes that we shall meet again and once again enjoy the company of friends... :)

It was a great pleasure to be in your company Judy and to enjoy the fun and laughter of friends. Hopes and wishes that we shall meet again and once again enjoy the company of friends... :)

Some of my favorite memories are those that I shared with blogger friends. Looks like you chose a fun group, Judy.

I feel like I know them too from seeing their comments on your blogs over the years. What a great crew they appear to be and I know you had a great time. So I guess all are on Facebook now? Remember when you blog had comments off the charts?

Yes, Annie, I remember when I had many more comments than I do now, but I never wrote a blog post with the intention of getting comments, so it doesn't bother me now that I have fewer. I think that is true for many of us, whether we are on Facebook or not.

A problem for me, though, is that I spend so much time on FB and playing scrabble, that I forget to read blogs that aren't posted on FB. I have to stop that!!

It was soothing balm for the soul, getting up with these folks!!!