Apparently, some time back, I started comment moderation on the blog. Trouble is  -  I forgot about it. I recall thinking recently  "No one comments on my blog anymore," and to my surprise.....I discovered today that there have been comments and I just haven't been moderating them.

I will try to be more careful in the future about checking. I have posted all that I could find, and I AM SORRY that it took me so long.

One of the Best - Part Two

Christmas Day was quiet.....and then not.  But I loved it anyway. I baked a small turkey breast; I was supposed to remove it from the oven after 3 hours. If my daughter had not texted me, it would have been burned beyond recognition. I had fallen asleep. Luckily, I was able to rescue it before disaster struck. I had texted her earlier, to ask if they had any mashed potatoes. She answered no, and then later asked if my turkey was for everyone. She said they could bring ham and rolls.....so suddenly a quiet dinner for 2 became dinner for 6 - and I wouldn't have it any other way!

Our grandson who is studying and teaching in NYC flew home at noon on Christmas. So it was a treat to see him, my two girls, one granddaughter and her boyfriend. We ate ham, turkey, dressing, gravy,  green beans and cranberry sauce. My granddaughter had made 2 pans of cinnamon rolls (from scratch) and she baked them while we were eating.  Suffice it to say they were Heaven on a plate!! Never have I had a cinnamon roll that good (and I hope it won't be the last.)

After dinner, we visited for a bit and then they left to see a movie. I have to repeat; this has been one of our best Christmases ever, despite Covid and the worst two years of our lives. However, I have to quit eating like this!  I gained 2 pounds in one day!

Again, I hope your Christmas was merry and bright, and that you will have a smashing year in 2022!!

One of the Best

We just had one of the best family Christmas celebrations in recent memory! It started with breakfast casserole made by our baby.....she brought it to us this morning.

About 11:am, we took a wheelchair-accessible van to her home. It was the first time Jim had been there in over two years......but she made this visit possible by renting a wheelchair ramp so Jim could get into her house.  It was decorated to the "nines" for Christmas.....and we loved seeing some of the things we have collected over the years.....our Dickens Village, for one.  A granddaughter set it up and I think she did a wonderful job! 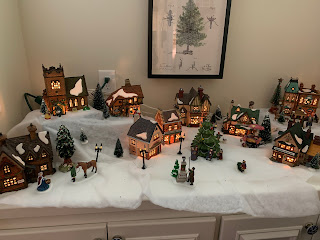 Several people contributed food or cooked it. Shrimp was our appetizer, along with meat balls in the crock pot.  Our grandson loves to cook; he grilled a beef tenderloin to perfection. We had mashed potatoes, broccoli, pineapple souffle and cheesecake. It was all scrumptious! I almost ate too much, but I made myself stop before I reached that point.

The highlight of the day for me was seeing a video of our family Christmas in our old home, when the grandchildren were young. It was the usual chaos you see at Christmas; we had six kids opening presents simultaneously. I am blessed with six beautiful grandkids, and they were soooooo very cute when they were little. Seeing them all in 2000 was such a treat for us!

I sincerely hope that you had or will have a wonderful Christmas and a very Happy New Year!

Due to several of our family having to work on Thursday (a nurse and a restaurant manager), we celebrated two Thanksgivings....one Wednesday and one Thursday.

Several weeks ago, Granddaughter Jessica announced that she wanted to have a "traditional family Thanksgiving", with all of us gathered around one big table, eating all the usual favorites. And the best part is, she announced she would cook it all, except my sausage dressing was requested, and I was happy to oblige.

On Wednesday morning, our son Darren arrived with his two girls, Emily and Grace. We had not seen the girls in a while, so it as wonderful to have them here, and together, as they clearly enjoy each other's company!

Throughout the day, my girls and grandchildren trickled in, one  by one. Jessica was hard at work, roasting a 20 lb. turkey, making mashed potatoes, green bean casserole, sweet potatoes, gravy and rolls. About 5 pm, grandson James arrived with new pup Ellie in tow. We put our cat Moppet in my bedroom. She is used to being in there when we have company, but not usually as long as she was on Wednesday. She began to howl mournfully in protest. Ellie made the best of the situation, stealing food and water from Moppet's bowl and running from person to person, obviously enjoying the love we all showed her.

About 7 pm, after Jessica's boyfriend Matt arrived, we ate a scrumptious meal....most of us over-indulging.....and topping it off with three different pies (pumpkin, apple and pecan.)

Later my daughter Aliza slipped out of the house, and I assumed she was going home to feed her dog. Boy was I wrong. A while later, I heard the garage door open, and in walked our grandson Jordan (Jessica's twin), who has been in NYC for 4 years, studying for his Ph.D. We were all SO surprised.....I couldn't believe it, as he had been vociferous in saying he "didn't have time to come home for both Thanksgiving and Christmas!

After the table was cleared off, 4-5 of us played my favorite game  -  Scrabble!

Moppet was really happy to get out of the bedroom that night....she promptly took up her spot on my lap, and she didn't even seem to mind that Ellie's scent was on the blanket. Here's Ellie in Moppet's favorite spot. 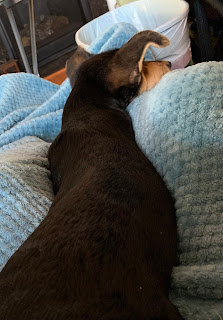 On Thursday morning, Aliza came over with a breakfast casserole of eggs and sausage. It was unexpected and delicious. We ate leftovers for lunch, and then James arrived again, bearing Ellie - and the makings of a great dinner. I'm so happy that our grandchildren love to cook.  He brought 2 prime rib roasts, asparagus, zucchini and mushrooms, tomatoes, and fresh herbs.  I have eaten enough already to feed 3 people and the left-overs are beckoning as I type.  Aliza made a pineapple souffle that was delicious...and I'm about to see if we have more of it!

James was intent on having Moppet and Ellie tolerate each other. HA!  Both were wary, and rightfully so. Moppet growled and Ellie yipped. Finally, they reached somewhat of a detente, although it flared up now and then.

Youngest granddaughter Julianna arrived with her mom, Shannon, and Matt came back (after spending day with his family). We ate James' exceptional meal, and Aliza cleaned up much of the kitchen. Then Jessica come back after working all day and cleaned up the rest of the kitchen, putting the clean dishes away. I couldn't believe it, since she had been on her feet all day long.  I guess when you are 25, you have inexhaustible energy....I have forgotten...as it was so long ago for me.

All in all, we have had a wonderful two-day celebration of Thanksgiving. We did talk about what all we were thankful for, and I told them I thank God everyday for my family; children and grandchildren, my friends and my talents. We are all so blessed, not that we all have not had some bad things in our lives to deal with, but with the help of family, friends, and God.....we can overcome anything. I sincerely hope that all of you had a wonderful holiday!

Yesterday was my birthday....I don't feel 81, but as I've said, the mirror belies it. I never expected to live this long. But as a magnet I once owned said "The meaner you are, the longer God lets you live." Maybe that's why I'm still here. There are some who might agree.

My adoptive mom died at 77 of gallbladder disease. She waited 5 years to have the surgery that was advised to her - and it led to her early demise. Let that be a lesson to you: If a doctor says you need to have gallbladder surgery - don't delay. The toxins that build up in your body affect every organ, eventually, and your body cannot withstand that forever. My adoptive father died at 91. He never had anything seriously wrong with him except COPD. He worked at Union Carbide and smoked unfiltered cigarettes for many years, inhaling all manner of bad chemicals.

My birth mother lived to be 85. I don't want to predict that I will too - but I hope I do - and beyond. I'd like to have a great grandchild before I go, but as none of my grandkids is married, I don't know when that will happen. My birth father died at age 52, of cancer; first the lungs and then the brain. I thank God I have (so far) not had any similar problems.

I'd like to think I have genes that will lead me to a longer and healthy life. Except for open heart surgery at 74, to correct a congenital heart valve problem, I've had nothing serious to mar my health record. Considering that I smoked 2 packs a day for 23 years, I guess I escaped the dogcatcher (as mom would say). I am very grateful that I was able to stop smoking cold-turkey when I was 38, and I do wish I had never started that filthy, expensive habit.

Getting older has its challenges.....but all in all......it beats the alternative.  I wish all of you good health and contentment for as long as you live. Thanks for reading....

When someone sends you an email, you have choices. You can

1). Delete it without response.

2). Read it, without response, but forward it on.

4. Read it and respond in a bitchy manner.

If you do the latter; complaining because they sent it to you and it may have a virus attached, do you immediately assume that was their intent?  Or do you think it may have been sent unknowingly. Or assume that just maybe it was sent because:

1. They were thinking of you, with love.

2. They thought it would be of interest to you.

3. They thought it was educational.

4. They thought you would enjoy it or laugh.