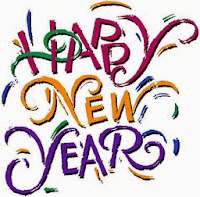 on New Year's Eve.....at least I hope she does. I'd like to put a booster rocket on 2013 and send it hurtling into space, wouldn't you?  I can't seem to find anyone who thinks it was a good year.

It wasn't a bad year for us, but all the sorting, packing, selling, moving and trying to figure out where to put it all in the new townhouse managed to sap most of my energy, and what that didn't take - my tendonitis did. Luckily, due (it seems) to physical therapy, that is on the wane.

We had a somewhat relaxing Christmas Eve and Christmas Day, spent in the company of all our children and grand children. Good food, a big TV, Christmas movies and/or utube videos made for a nice time. Of course, most of us see each other fairly often, so it isn't like we had to catch up on conversation.

More therapy, haircuts, shopping and a bit of dog-sitting are on our agenda for the next week or so. Certainly nothing exciting....What are you doing to mark the end of the year?

Can we put an end to negativity, controversy, twerking, racism, name-calling and the like in 2014?

I will be singing along with the fat lady; won't you join me in welcoming 2014 and willing it to be the best year ever? All it takes is you......and determination.
Posted by kenju at 1:05 PM

I have to agree with you on a better yr to come! This one kicked my butt also!! It can't finish fast enough! As for the rest of the holidays.. Things are routine here since we are care givers. We are invited next door for our neighbours 50th bday party this Saturday, so great excuse to get all dressed up and justify the new dress I got recently! For new yrs eve, we are hosting a cpl for a nice meal and probably movies. Very relaxing evening with good friends! the perfect way to bring in a new year!

I do agree that 2013 was not one for good memories, necessarily. I do hope for better in the new year.

I do hope your tendonitis continues to improve. That hurts, I know.

If you are like me, you'll probably be sound asleep when the new year rolls in.

Yep, I'm ready to put 2013 to bed too. Have a wonderful New Year! I am not sure if I'll get through Raliegh, but we are in GA now and will swing through Wilmington before heading back north.

The only way to avoid controversy is get out of Facebook but the I lose contact with my grandchildren so I'll just stay and fly past all the crap:) Come on 2014!

And I agree totally with what you said in your previous post. I'm a Christian, although with doubts and questions, but to act like that man did is so totally opposite of what the Gospel stands for. Though I rather suspect that in the church I not go to there might be some who have sympathy for that man. But it is a friendly church, with lots going on, and I go there mainly because of that. I shut my mouth on many occasions! There is no ideal church!!

Belated Happy Christmas and wishing you everything good for 2014

I do agree with Grannie Annie, Facebook really seems to be more of a destructive thing than anything else which is why I refuse to be part of it.

I'm flying to AZ tomorrow, and will be there for the New Year and can't wait!

I'm in! What shall we sing?

Judy, 2013 was one of the worst years that I can remember... the Shingles really did me in and I am still feeling the effects.
BUT..I'm determined to forget it and start anew in 2014.
Hope you and yours are well and I look forward to some fun blogs from you in the new year. Hugs, Ginnie