Happy Anniversary to Me! (Oh, and Mr. Kenju, too) 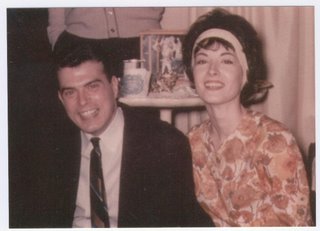 Way way back in 1964, I met a guy on a blind date set up for me by a friend. He was playing basketball on a Navy team in Norfolk at the time, and I was invited to a game one night. My matchmaking friend said "He is the best looking guy on the court. So who do you think it is?" I took a long look around and immediately ruled out about 7 of them. Then my eyes landed on a guy who resembled Fabian Forte (the singer), if Fabian were much taller and less girly-looking......LOL. That's Fabian on the upper right.

Now 51 years, three children, eight  grand kids later,  we are still together. "Inertia", I reply, when asked what has kept us married for this length of time, and there is more than a hint of truth in it. Read about our wedding in the archives on May 30, 2005 and our honeymoon snafu on December 13, 2005.


I kid about what kind of glue has held us together for so many years, but there must be some love here somewhere....LOL. We argue more often than not, but we are committed (or maybe it's that we ought to be). The woman who introduced us has since become a psychologist. I'm not sure what her impetus was; I hope it wasn't us. She says that one of the reasons we are still together is that we are comfortable enough to fight and say almost anything, and then we get over it quickly. I don't know if she is right but it sounds good. She does caution us that arguing should be productive and not deteriorate into name-calling. We are not always victorious in that endeavor, but we don't harbor grudges for long - and therein lies the root of our success. At least I think that's part of it.


We've been through thick and thin, poor and well-off and poor again, health and minor sickness, joy and despair. It would be a darn shame to end it now, wouldn't it?

So, happy anniversary, honey, and I hope you can abide me for a few more years. I'd like to reach our 60th.


(This is a repost from a few years ago, with minor changes in numbers.)
Posted by kenju at 1:00 PM

What a thrill to be able to be a part of your celebration: thank you for writing this for all of us who read you!

May you have many more years of happiness together. May the richness of your life be an inspiration to everyone who knows you. I'm one of them, and I'm inspired.

Well, my goodness you are both gorgeous ... and it's clear from that photo that you have gorgeous spirits, too.

You are still together because you are best friends and feel safe enough to have a good spat nd clear the air when you need to.

Happy Anniversary! That is quite a milestone.

Happy anniversary, and here's to 50. I was married for 27 years--this would be our 47th year. We are cordial to one another--we are still family. I applaud you for your commitment; don't see that much anymore, but long-term marriages (if they don't make you nuts) are still the ideal.

Happy Anniversary!
Y'all are a great looking couple!

Happy Anniversary! Yes the arguing will never go away, my folks, now working on year 56 can confirm that. Dad always says that he chased Mom until she caught him. The funniest thing for the children, at least me, is how they both need some help in the hearing aid department. Statements from both to each other are NEVER understood the first time and sometimes what they think the other is saying is too hilarious for words. Laughter. That is a key. At this point it certainly helps. Again, congratulations and keep on keeping on.

Happy Anniversary. You guys will do 50 without batting an eyelash. I can se the Fabian connection. I read up on your honeymoon. That is a cute story to tell the 9 grandkids!

Happy Anniversary! I have no doubt that you'll make it to your 50th and well beyond. I hope you have a wonderful day together!

Happy Anniversary and the photo if fabulous!

A day late....A very Happy Anniversary to both of you.
Love the photo and gosh, he really did bear a striking resemblance to Fabian. Had posters of him ALL over my bedroom...along with Frankie Avalon, Paul Anka, etc. Loved those 60's singers.

Congratulations on this milestone.

Happy Anniversary - to both of you!
Here's to many more.

I love the pic, I have seen it here before and you two are soooo handsome. Happy anniversary and many more. Wise, honest words, kenju. Cheers!!!

What a good looking couple! And Judy is so beautiful!!!!
I had to smile at your honesty about the arguments and so forth, my hub and I are much the same way. You're right, it's important not to hold a grudge.
Happy Anniversary to both of you!

Happy Anniversary!
We just had our 39th in June.
Long marriages are not the norm anymore, but I don't there's any magic answer why some last and some don't..
Fifty years will be here before you know it (Look how quickly you got to 42)!!!
:-)

Happy Anniversary and frankly, it sounds like a wonderful marriage from the get-go. So I hope the two of you find a great way to celebrate and start planning the 50th. It will be here sooner than you think.

Fabian and Kenju are quite attractive -- especially Judy!

And it doesn't much matter why you're still together; all that matter is that you are.

I'm still trying to figure out what took you so long. Six months? My goodness!

Happy Anniversary Mr. and Mrs. Kenju. What a divine looking couple you are.

You're gorgeous! And so is Fabian! What ever happened to him?

Is this the first photo ever posted of you?

Your husband is hot! Definitely a keeper!

Short courtship = long relationship. I never knew that formula before.
...It must work, look at you two!
...Good post.

Congratulations Judy..I wasn't visiting yesterday and really have hardly been on today..So I apologize for being Tardy! (LOL).
I think it is fabulous that you and Mr. Kenju have been together for 42 years! And I bet you make it to more than 50!!! Hearty Hearty Conratulations Judy.

Have a Happy Anniversary. and a happy year to follow.

Congratulations! A belated Happy Anniversary! You both are very beautiful! I have seen this photo before and I love it! Love also your words, so inspired and wise!

Congrats... always so encouraging to hear 42 years! We're coming up on 19. :) Hope your anniversary was peaceful and fun.
~S

Congrats on another anniversary. Sounds like you never bore each other. 50, here you come...

That is wonderful, thank you so much for sharing that with us..and a BIG CONGRATS to go with it. We see fewer and fewer cpls who last that long. My own parents divorsed 25 yrs ago. It is so nice to see longevity still happens...As I have been *married* all of (checks watch) 24 days!...I could only hope to enjoy as many yrs. We have been together 4 blissfull yrs already...both of us in our 40's now, I sincerely hope we could be so lucky to have many many more.

HAPPY Anniversary!!
You look so pretty in that photo, and your hubby looks very handsome.
I wish you many more happy, healthy years to continue fighting. :)

I've been married many years too, just not to the same person! Good for you, finding a man who would be your friend for life.

Happiest of belated Anniversaries to you and Mr. Kenju. Yes, being open communicating is so important and moving on not harboring grudges. I've seen too many grow apart by not talking and holding "stuff" in. Very special wishes to you both. That is a gorgeous photo, too!

Dear Judy ~~ I have been slow to wish you a very Happy Anniversary, but I hope
you and Mr. Kenju have many more happy years together. Did you see my 10
commandments of Marrieage a couple of days ago. They were quite funny. I hope
you both had a Happy 4th July.
Take care, Merle.

I just learned about you and all I can say What a wonderful love story you have, I love the way you tell us in a funny way and at the same time as a life lesson for all of us about your fights. All I can say is: Congratulations and Cheers!!!

Am too late to wish you a happy anniversary, but I just wanted to tell you that I loved the post! I will be back. (not a threat, a promise ;))

Wow! You are right about him looking like Fabian. I thought the piccie at right was another shot of Mr. Kenju. You looked quite the beauty yourself also!

Happy Anniversary you 2. And many more :-)

I sooo remember your story, Judy.... love it that you made it as far as you guys did! Wonderful!AND AND AND ... words can't describe how much I love black and white photos... you were and still are so beautiful.

Congratulations to the both of you!! Fabian was a good looking young man, shame he couldn't sing. :D

I so loved reading this Judy...Thanks so much for sharing your lives with us. A very Happy Anniversary with many more to come.....for more memories and new stories to share.

Wish we could hear about all this from the mister's perspective. I'm betting he was, and continues to be, stunned by your beauty and sang "Hold that tiger" over and over:)

Never knew Fabian even had a last name.

Happy Anniversary to you!

What a lovely story. May you and your groom have a lovely time celebrating.

PS: I will be here to read your story about the 50th Anniversary.

Hi Judy,I am envious of the relationship you and Mr Kenju have, may it last for many more years to come.

Well, my dear Judy, I think there is a lot more LOVE there than you own up to---48 years...Bless you both! You were both so incredibly attractive and you still are....!
I know you will make it to 50 and a lot more, God Willing, And The Creeks Don't Rise, as the saying goes.....CONGRATULATIONS TO YOU AND MR. KENJU, MY DEAR....!
Hope you had a lovely celebration!!!

Big time congrats to you and Mr. Kenju. What a great looking couple you were and still are. I'll bet he picked you out of the crowd also.

Fabian has a last name? Who knew?

Belated good wishes for another year with your guy.
Cop Car

BTW: In my book, respect is a required ingredient for a long-term relationship.

Well now, I'm the 50th Comment, so that is a splendid omen for you to reach the magic 50 years (we've reached ours, but I didn't notice much magic!! LOL)

And Judy, I just love that 60's hairstyle, my hair would never stick out like that or look so good!

You have just got 50 comments and now I'm going to spoil it with 51.
Marriage is hard work and to survive this long there has to be love and respect and a healthy disregard for each other's limitations and habits that may drive us up the wall!
Jolly well done - both of you.

When anyone asks my husband how long we have been married he usually says, "I have had 25 happy years with Nancy and that's not bad out of 62."

How's that for an endorsement?

A belated but Happy Anniversary wish to you both! Handsome couple and he does resemble Fabian.

HAPPY ANNIVERSARY!!! We're approaching #33...don't ask me how. Not sure LOL

Happy Anniversary! You two are the role models for keeping it together!

Yall are so glamorous! Keep up the good work. <3