A Very Proud Grandmother, I am! 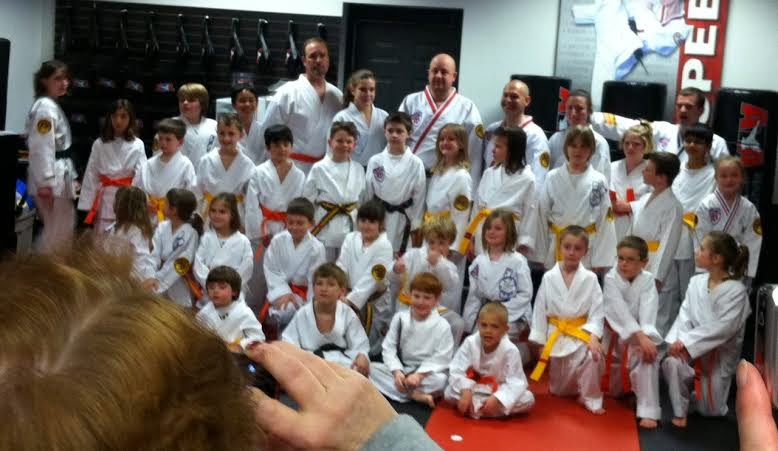 My youngest granddaughter (#4) is a student of Tae Kwan Do. Tonight, her aunt and I went to her graduation; in which she received a new belt - a camouflage. She replaced her yellow belt. I don't know how the belt colors progress on their way toward the black, but we saw many different ones tonight.

It was fun to watch, even though I understand very little of it. When we first got there, an adult was progressing through a test leading him to a 3rd degree black belt  (I think). It was interesting, but the little ones were a real treat. I think they called it the Tiger class. How cute and energetic they were, and for the most part, well-behaved. One boy threw a miniature fit and laid on the floor when he had been told to stand up - but after a private word from the instructor, he straightened up and flew right, as they say.

By the time my granddaughter's group was finished and the photos were taken, her aunt and I were famished. Off we went to the nearest Mexican restaurant, along with the student and her sister (granddaughter #2). We were pleased to see no line, and we were seated immediately. It's too bad that her mother couldn't be there (she was working) and grandpa has a sore throat, so he held down the fort here at home.

I haven't had a Mexican meal for ages, now I want one!

Well done to your Granddaughter!!

When our grandchildren take the limelight it just makes us bubble up inside and out. You had to be proud of her even if you didn't understand all the moves.

Those kids look so eager, I would love to have seen them! I don't understand Tae Kwondo either, but I know it is quite hard and physically demanding. Which is one reason I can't do it - I can't balance very well!

What a wonderful thing to see! How old is your #4 Grandaughter? How great that she is involved in this discipline...I don't understand it at all, but I know it is a terrific thing for kids to be learning!
And what a treat to go eat a lovely Mexican Meal!