The Doc, A funeral, a Friendly Bakery, Moppet's Easter Passion and the Best Ending

I had an appointment with the orthopedist this morning; it looks as if I'll be wearing this darn sling for another month - and not driving either. That might be a good idea, since the local cops and troopers have declared war on speeders. New x-rays showed that my broken clavicle has not begun to knit together yet. There are "fibers" extending from each end to the other, but no actual bone. It's a function of age, I'm told. Stinks to be this way. I just have to be patient.

I then attended a funeral for the father of a good friend; in Wake Forest, which is about 35 miles from our new home. My daughter is becoming our chauffeur during this time when I cannot drive, and it is not easy for her, taking time away from her business. We headed toward the funeral and had a few minutes to waste, so she stopped at a bakery on Main Street, and I got a cinnamon bun and coffee. I sat out front at their tables; the weather was terrific today (79* and sunny). The only downside was the pollen, of which I am sure I must have consumed a lot.  I used my phone for a few minutes, and I had to keep wiping pollen off the screen so I could see. I guess a lot of it fell on my cinnamon bun before I finished eating it. What I noticed while there was that everyone who came out of the restaurant/bakery said hello. what a friendly little town!  One guy came out to clean the pollen off the door and windows and noticed my sling and asked what happened. I told him and he said not long ago he was in a car wreck. Anticipating the air bag deploying, he put his left hand up in front of his face and it broke all the bones in that hand. The upside was that there was no injury to his "moneymaker" (as he called his face) and since he was pretty cute, I guess he was right.

The time for the funeral visitation/wake loomed, so we went there, and I was dropped off. There were about 100+ people at the funeral, only 4-5 of whom I knew, but it was good to chat briefly with a few, especially two women who used to help me in my flower business. I had not seen either of them in a long time. It was a lovely service - as nice as a funeral can be, I suppose. I was so glad I was able to attend. I wanted to go to the reception afterward, at my friend's home, but my daughter had to get back home so she could work at least part of the day.

The downsides to the day:  Moppet has discovered my Easter decor chicks and eggs. I have had to pick at least 5 of them off the floor since I got home at 3pm and she has been sprayed 4-5 times in an effort to persuade her to leave the display alone. So far, it isn't working.

The next downside is that despite being asked by me and our daughter to keep his phone on and answer it when it rings, Jim turned it off to charge it and never turned it back on. The upshot was that Jim was unavailable to us from 9:30 am to 3:00 pm - which is totally unacceptable. I called him 12 times and our daughter must have called 15 or more. It is worrisome, given his health history, when we can't get a hold of him. I hope he will heed our requests to not do that again.

The best part of the day:   A Carolina Sunset 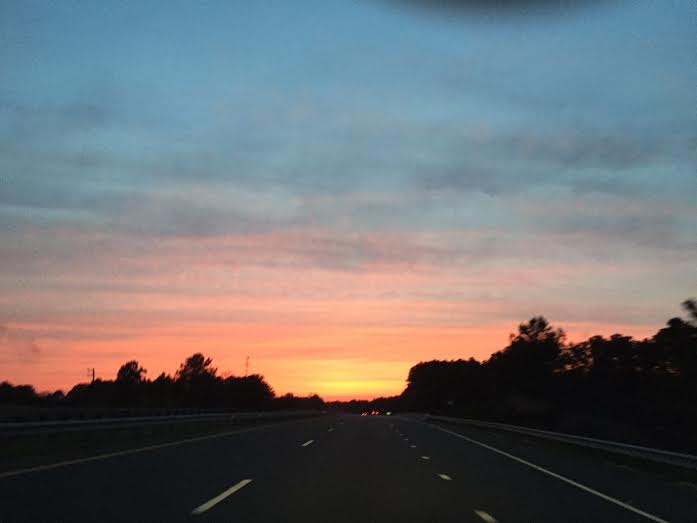 Men of a certain age and their phones. That's one of the reasons we still have a land line. Steve can't find his cell half the time. You knew it was only a matter of time before Moppet found the display. I could squirt 5 gallons of water at Emma and as soon as I am in another room, she misbehaves again. She does rule the house. I have to laugh at people that are positive their cats never jump on counters or kitchen tables......yes, they do, you just don't see them!

It's like parents who think their kids are angels all the time. Often, they are the worst when they are not at home.

Sorry to hear about the broken clavicle. I wouldn't mind the part of having someone drive me around. Moppet might need a new toy or something to distract her from the decor. I have a feeling nothing will help with that though! Beautiful sunset!

Hi Judy. Just stopped by to say Happy Easter to you and Mr. Kenju.

Oh Judy you have got your share of woes. I know that feeling when the spouse won't or can't answer the phone. Your rush home madly only to find them oblivious and most times sleeping. Yikes! Moppet is trying to perform physical therapy on you by knocking around the eggs so you can get exercise picking them up. What would we do without our children to be willing to rescue us? And what a lovely sunset.

Sorry to learn of your accident -- patience...patience on mending. Can appreciate you would have been concerned about your husband not answering his phone. Tie it around his neck??? (-; No, I guess not. Fortunately I have a land line, too, if mine comes up missing.

So sorry about your accident Judy. Hope you begin to mend and hope you enjoyed a Happy Easter in spite of the sling!

Lovely to catch up with you again Judy.
Naughty Jim!
My shoulder seems to have come out in sympathy. Possibly because before my son came for Easter I carried a heavy bag up the hill. Daft I know. It's always the vulnerable one.