A Bright Spot in My Life... 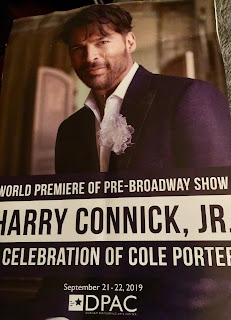 Yesterday I got an email from DPAC (Durham Performing Arts Center) that there was a lottery I could enter, to win the right to buy "cheap" tickets to see Harry Connick, Jr. in his new show.


I seldom win anything, but I thought "what the heck? I may as well try."  So I entered and almost immediately, another email arrived.  My entry had been received and I was told to check my email frequently, as I would have 1 hour to pay for the tickets, if I had been chosen.

So guess what?  In another 2 hours, I got a message saying I had won the right to buy the tickets.....so I whipped out my credit card and in a matter of minutes....the deed was done. My only problem was to find out if my daughter could take me to it and luckily, she said yes. It is in an area that I am not familiar with, so I wouldn't want to drive there at night.

The concert was fabulous. It is the world premiere of a pre-Broadway show, and I for one was happy that he started it in Durham.  It is a tribute to Cole Porter; whose music is classic, universally known and appreciated, and Harry is the very person to do it justice!

Accompanied by an orchestra of about 25 guys, Harry announced that 5-6 of them were from his band, with whom he has been touring for over 30 years, and the rest of the guys were from in an around the triangle area. Lucky ducks.....to be in that group!

There was a special guest....a trombone soloist named Lucien Barbarin.....who was just as fabulous on trombone as Harry is on the piano.

One segment I enjoyed was when Harry showed us how he scores a piece of music. A large movie screen behind the orchestra showed graphics of music staves and his annotations, and Harry narrated how he decides what instruments will play in each measure. It momentarily brought back my years of piano lessons - of which I have fond memories.

I am extremely grateful to have been able to see this wonderful show (especially for less money that the usual cost of seats in this venue.) Considering how our lives have changed in the last few months, I can really use some stress relief. This filled that bill very well.

In the elevator after the show, a woman complimented my earrings, saying "They are gorgeous." and her companion said a very nice thing to me - so I floated home on cloud nine.....lol

So glad you got some “you” time Judy.

Lucky, lucky you … but very deserving. I'll bet Jim was happy for you too. I hope he is getting on and will be able to come home soon.

Happy to hear you got a wonderful night out and such a fabulous concert too. You certainly deserve it. :-)